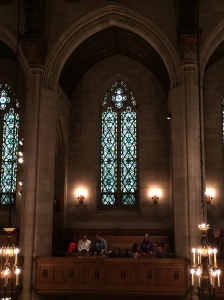 Today at church the pastor spoke of one of the (seemingly) smaller pieces of what happens after Jesus’ crucifixion and before his resurrection. It’s a passage of scripture that can easily be brushed over in any given reading, if you do not stop to understand the reason why it’s in the text:

It is not lost on me that this year, I have been reading about the instructions God gave Moses in building the temple… the ones that put the curtain up in the first place.

I have been swimming in the cultural context, if you will, of the time in which the story of the Exodus takes place. People who spent years in slavery, with a promise of land from a god that spoke to their ancestor Abraham. I am sure they re-told stories, but by the time Moses came to deliver them, they must have wondered where this god was. They spent generations watching people around them worship many different gods, and it’s highly possible that they also were not monotheistic at the time (think about the golden calf incident). The idea that a god would not just lead people out of slavery but then would make a covenant with them AND come to visit them? Who was this God?

Holy and dangerous – is how God came across to them at Sinai. They feared him when he spoke and begged him not to speak any more. “Speak through Moses” – they pleaded. We will listen to him. But God was insistent on finding a way to be in the very midst of his people, even though they were stubborn and repeatedly failed to trust Him on the journey in the wilderness. Hence – instructions God gave Moses on having a “tent of meeting”, or a mobile tabernacle. God continually met with Moses and Aaron in this sacred place, and when He did, people noticed. As this recently-delivered community of slaves questioned and argued and challenged Moses, God still came, in a cloud, to lead and help give direction. Yet in the tent of meeting, a curtain was there to protect the people from His presence, and no one was allowed in except Aaron and the priests. In fact, when the cloud moved, the text tell us that Aaron and his sons had to very carefully place the curtain over the ark of the covenant, then cover it with leather and more cloth, before it could be carried. If anyone touched it other than the priests, they would die. God’s presence good to have in their midst – yes – but it was also very dangerous for them. (Num 4:5-6, 15)

I know it’s hard for us to understand this kind of holiness. I certainly struggle with it, but that is probably because I’ve only ever been presented with the openness of relationship with God that is represented in Jesus and his work on the cross. Don’t get me wrong – God is still holy, but the fear of being in relationship with Him has been settled long ago, and I’ve come to trust that bigger truth.

Following the Israelites across the pages of the Old Testament, we find that this ark of the covenant eventually came to rest in a physical temple. The building grew bigger, and so did the curtain. More and more layers. More and more distance between the everyday person and the very presence of God.

Yet God’s heart, His desire to dwell with his people, never changed….even though they continued to be stubborn (as do we sometimes, right?)

After Jesus died on the cross, the curtain tearing in the temple was thus the great undoing of years of separation. God forever declaring He would no longer be contained in a physical place, that instead access to his presence would forever be open to whoever might come and seek Him.

Pretty beautiful, isn’t it? In some ways, this is the side of Easter that takes some meditating on to really let its truth sink into your soul.

My friends, I don’t know your church background, and I don’t know what you have been taught about God either. You may struggle with belief in an ancient story, or may question the absurdity of the claims that God can dwell with us here in this broken world. You may doubt that you really can go straight to God, that He would ever really want to hear from you. Oh, let me promise you – He does, and he made a way for you to get there. But all of these things are real, honest, and matters you will have to wrestle with, for they are the stuff of faith.

In this week leading up to Easter, I encourage you to sit for a moment and let there be some “undoing” in the space between you and God too. He’s there, and I promise He’s patient.

I'm an avid reader, tea drinker, and outdoor adventure seeker. Recent transplant to Colorado and LOVING IT! Convinced that God is still out to fix this broken world, and He uses us to do it. Chasing after things that matter... View all posts by tamapress

One thought on “The Undoing”