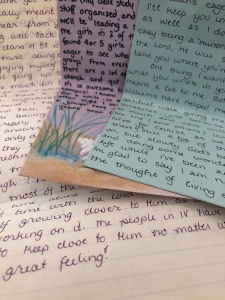 This past week I received a relatively thick envelope from a name I had not seen in years. Opening it slowly, I read the typed letter I was holding in one had, with a bundle of letters and envelopes in the other. The letter was from Dave, an old youth group leader of mine, sharing with many of those who he had mentored in the past that he was in the final stages of lung cancer. He was returning to all of us the letters we had written to him when he was deployed in Desert Storm and when he later lived in Germany, sharing how much of an encouragement they had been to him during that time.

I stared at the letters and cards I had written him my senior year of high school and first year of college, 1989-1990. I could hardly believe my eyes.

For one thing, no one else I have ever known has saved letters I have written, even though I have saved many other have written to me over the years. The other thing was I noticed (quite humorously) that my handwriting was still the same!

I looked at the weathered and tattered pages and re-read them all, for they documented for me some of the earliest years of my faith. I skimmed them some, recalling things I shared about living in Germany, tough classes I was taking, and how I tried to encourage someone who was also investing in me and my young faith. What struck me the most was a line from a letter dated January 1990:

I was still 17 when I wrote that, but the statement came nearly three years after my good friend Jill swooped in and latched onto me, a quiet 14 year old that had just left a small school in Germany and got plopped into a high school of 5000 students. I found myself surrounded by people who loved God and just invited others in, along with a few very Godly men and women who simply spoke of their love for Jesus and all they had found in him. They didn’t try to “convert” me – they just loved me, encouraged me where I was, and talked about what it was like to surrender your whole life to him.

I honestly do not know where I would be had they not invested in me. Oh, I was a good kid and so I am sure I would have done well, but I don’t know that I would be someone whose greatest joy is in helping others know Jesus.. the same thing they did for me.

I think that’s a lot of what Jesus meant when he talked about “bearing fruit”. It’s probably similar to what the world would say when they talk about leaving a legacy for people to remember you by. What works were done in your name, what stories will be told about you…

Not that any of that is bad, but the reality is unless you make some huge contribution to the world, you’re probably not going to go down in a history book, right?

Yet fruit. The reality is that Dave and others walked and talked and showed me Jesus, even when I wasn’t necessarily asking to figure him out early on. I was just there. But his life had an indellible impact on mine, as did the other youth leaders that were part of MYF (Methodist Youth Fellowship). Big or small, it had an impact.

As I am watching the young women in a bible study I lead surrender their lives to Jesus more and more, it leaves me dumbfounded – primarily because I know I didn’t pray for all that God is doing. Imagine that.. He has his own plans for others we know nothing about, no matter how we pray. I sit back in awe of all GOD is doing in their lives, blatently aware that it is all Him doing things. Just him. I often feel like I’m just sitting on the sidelines.

In the big scheme of things, I have to smile. That commission of Jesus in Matthew 28 where he tells his disciples to “go and make disciples” – this is exactly what that looks like, and what it’s supposed to look like (note: sometimes this verse gets a bad rap.. I wrote about it in another post a few months back). One generation helping the next to wrestle with their questions and walk along side of them to understand what it is to be in relationship with a living God, what it is to surrender and let go and trust someone you cannot see.

Sure, an inspiring sermon or blog might get people thinking, and I know God can speak through any medium He wants to. But we can’t underestimate vision casting for people what it is to really BE in Christ, to follow him and surrender and be transformed by him. When we share how he is our strength in the mess, how we struggle to trust when the trials come, but how our souls are finding rest in the journey – the Holy Spirit really does work to transform others to draw them near.

Do we believe that any more? I hope so. But for some of you, its going to mean risking getting over your fear of knowing exactly what to say. Not everyone is afraid of talking about spiritual things – the conversations just look different now. NOTE: If you’d like to read a refreshing take on making disciples in today’s world, I’d recommend “I once was lost” by Don Everts.

Today I leave you with a quote I found recently online, for I think it says it perfectly. As we go, what we say, what we do, good or bad, gets woven into the lives of others. So go be an image bearer, and let your legacy be that people wanted to know Jesus because they saw Him in you.

“What you leave behind is not what is engraved on stone monuments, but what is woven into the lives of others.” – Pericles

As I sit and think about what it means to be a disciple of Jesus, I am struck by the reality that sometimes I have no clue how it really happens. I can look back over my life and I realize that one day I was introduced to the person of Jesus, and then nearly three decades later it’s like I blinked ….and I see that my life has been full of watching people and walking beside people that know Jesus, and that is part of how I learned. They have walked through the ups and downs of life with me all these years (and I have with them as well). As a result, I can honestly say I have fallen in love with who Jesus is, his purposes to show such ridiculous grace to this entire world, and his kingdom values where the poor are lifted up, the broken and lost find hope and healing, and everyone gets to play.

But see, I don’t think we can get a full picture of who Jesus is just by being around his people. Because, if you ask them, they probably learned much of what they know from studying Jesus himself, by reading their bible and diving in, and by leaning on the character of God when life didn’t measure up. But why is this hard nowadays?

Whether you have been in church for some time, whether you are new to it all, or somewhere in between — I think sometimes what we have a tendency treat the actual stories of Jesus as if they were on our Instagram feed.

We scroll through the pages of scripture, convenient with subtitles and/or red-lettering, and we go “that’s a cool story” (double tap HEART)… not sure about that one… and, just like on Instagram, we love and comment on the bite-size stories that present themselves.

But we stop there.

If Jesus parables and stories are intended to be a window into the kingdom he came to bring, then shouldn’t we put a bit more study into it than just slighly remembering the story? Instagram pix might be great for catching up, showing something you are proud of or you think is beautiful, maybe its for selling a product or any number of other things… but Jesus came to transform us….. and it takes more than just liking a parable to transform.

I know sometimes we wrestle with seeing how very different Jesus and his ways were in his day and culture, and how shocking what he said might have been to his hearers, and maybe that makes it difficult for us to tranlate to our own day and age. But if we are to really be a disciple of Jesus, we must look. We must question. We must let it transform us.

Its the difference between being a “fan” … and someone who is falling in love with the God who loves them.

It’s interesting for me too, as I start writing my first exegetical paper for one of my seminary classes. See, I have chosen a passage from Hebrews (5:12-14) where the author is challenging his audience and their spiritual maturity. The writer is an intellectual of sorts, familiar with Greek reasoning and ways of dialogue, and he is trying to challenge things that are distracting the church body from maturing in their faith…. and they are distracted precisely because they have stayed at only being content to know the basics of faith: repentance, baptism, resurrection, etc.

N.T Wright leverages a challenge in his commentary on this passage, that we who profess faith should always be aware if our answer to grasping the more difficult things of the faith is “I don’t get it, that’s too difficult to understand”.

That doesn’t mean that we get it all right away though, so please don’t think I am saying that. What I am saying is that we need to remain teachable, always learners to how God is at work in the world around us, how the words of Jesus need to transform us from the inside out – and how we need to be willing to wrestle with the difficult things our world presents us today.

God is not absent from this world, my friends. We may not always be able to see it, but if you really seek to follow Jesus.. I can guarantee you will get it one day. Be willing to be like Jacob and wrestle, or like Thomas and ask for proof. Just don’t close your eyes and stop looking!